Gazprom supports both large-scale international arts and culture and the regional-scale projects. No matter its status, each project matters: arts shall be accessible to people in all forms and require to be supported.

In 2018, PJSC Gazprom continued participating in the “Russia. My History” National Project. In course of that project, historical parks are established showing the history of Russia and individual regions in multimedia format. The projects are co-financed by PJSC Gazprom and the constituent entities of the Russian Federation. In 2018, historical parks were opened in the Krasnoyarsk Territory, Saratov and Rostov Regions. In 2019–2020, multimedia parks shall be opened in six other cities in Russia.

In collaboration with its French partner ENGIE, PJSC Gazprom finances restoration of the Lyons Hall of the Catherine Palace. The painted ceiling piece, lapis lazuli mosaic panels and textile decorations were recreated. The renovated hall shall be opened in 2019. In addition, renovation of the church of the Resurrection of Christ of the Catherine Palace which had started in 2015 was completed in 2018.

In 2016–2018, Gazprom Group financed the set of restoration works at the Chinese Palace in Oranienbaum, including support of acquisition of two unique 18th century antique armchairs to be placed in one of the palace halls.

In 2018, Gazprom supported the following works:

In 2018, the Gazprom Group continued backing the A.V. Alexandrov Academic Song and Dance Ensemble of the Russian Army of the Ministry of Defense of the Russian Federation, the State Academic Mariinsky Theatre and its Primorsky branch in Vladivostok, and CONTEXT. Diana Vishneva, an international festival of modern choreography. 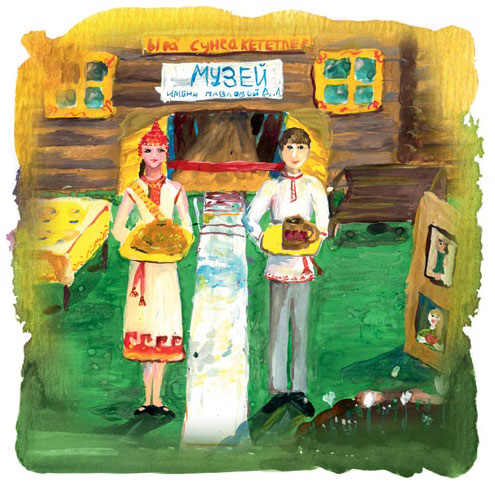 In 2018, in collaboration with Austrian OMV AG, Gazprom Export  LLCbacked the “Imperial Capitals: St. Petersburg and Vienna. Masterpieces from Museum Collections” exhibition project. Within the framework of the project, the masterpieces from the collections of two leading museums of the world, the State Hermitage and, Vienna’s Kunsthistorisches Museum were exhibited in Austria and in Russia.

The “Surrealism is me” exhibition of 78 drawings by Salvador Dali backed by Gazprom Dobycha Yamburg  LLCwas opened at Novy Urengoy City Museum of Fine Arts. The unique collection was provided for the exhibition by modern arts gallery, PS Gallery, in St. Petersburg.

In December, the final performance of “Turgenev. Today!” Project was held in St. Petersburg at the Academic Maly Drama Theater — Theater of Europe. Gazprom Transgaz Moscow  LLCwas the organizer and the key partner of the performance. The purpose of the project was to introduce general public, primarily schoolchildren and students from the regions of Russia, to classic works of Russian literature, motivate them to study Russian history, culture and literature, preserve and promote the creative heritage of the great Russian writer Ivan Turgene on the eve of his 200th anniversary. .