(1) In accordance with the new Classification of Reserves and Resources of Oil and Flammable Gases (approved by the Order No. 477, of November 1, 2013, of the Russian Ministry of Natural Resources and Environment), in effect from January 1, 2016, corporate reporting procedures must record reserves of the А+В1+С1 category, which comprises explored reserves with a high degree of geological certainty and correspond to the previously applicable categories of А+В+С1.

During the reporting period, the changes of gas condensate and crude oil reserves according to the Russian and the international classification were driven mainly by GPE, production and taking into account the actual exploration data.

(1) Net of the share in production of organizations in which Gazprom has investments classified as joint operations. 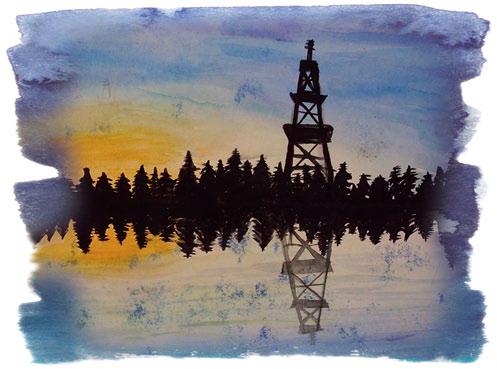 In 2019, Gazprom Group plans to produce 41.7 mmt of crude oil and 15.7 mmt of gas condensateNet of the share in production of organizations in which Gazprom has investments classified as joint operations.

The main sources of production growth will be the operating and newly commissioned fields, development of unconventional and hard-to-recover reserves, e.g. the Bazhenov and Achimov formations, and offshore projects. In the medium term, the Company plans to achieve the strategic production target of 100 million tons of oil equivalent with ensuring 15-year proven reserves and 100% annual replacement. Further growth is planned at least at the industry average level.

As of the end of 2018, the Gazprom Group’s increment of liquid hydrocarbons reserves driven by GPE in А+B1+C1 categories in the Russian Federation was:

As conventional reserves are depleted, crude oil production would be associated mainly with new fields development in remote areas.

Unconventional and hard-to-recover reserves are concentrated in the Bazhenov and Achimov formation. The Bazhen Technology Center was established for the Bazhenov formation development; its key objective is to develop the set of commercially viable Russian technologies. In 2017, the project was awarded the National Project status.

In course of unconventional hydrocarbon reserves development at the Bazhenov Formation, Bazhen Technology Center tested successfully eight new Russian drilling technologies. Ten high-tech wells were drilled, and commercial oil flow was achieved at each of them. In 2018, Bazhen Technology Center performed 70 stages of hydrofracturing of the formation (HF), achieving the density of 15 stages per 1,000 m. The high-tech wells drilling terms were reduced from 47 to 35 days, and the HF stage term was made two times shorter, from 48 to 24 hours (the best result was 8 hours).

The hydrocarbon feedstock increment target was set for 2019 at 625.3 million tons in terms of reference fuelNet of Gazprom Neft Group and organizations, in which Gazprom has investments classified as joint operations, including 14.5 mmt of gas condensate and crude oil. Most of the increment of liquid hydrocarbons reserves is expected in the Kara Sea shelf area.

In 2018, the Gazprom Group increased liquid hydrocarbon feedstock (crude oil, gas condensate, fuel oil) by 5.1% to 67.4 mmt; the growth was driven mainly by the increase of processing at Gazprom Neft Group and Gazprom Neftekhim Salavat facilities.

Gazprom Neft performs most of the liquid hydrocarbons refining within the Gazprom Group at Moscow and Omsk Refineries.

In order to increase the depth of oil refining and increase the yield of light petroleum products, in 2018 Gazprom Neft continued implementation of the second stage of technological and environmental upgrading the operating refineries. At the Moscow Refinery, construction and installation works were completed at the modern energy-efficient Euro+ complex. Its commissioning will help reduce the environmental impact per ton of crude oil processed by 11.1%.

At the Omsk Refinery, construction of the new CDU/VDU for primary crude oil processing, the advanced oil refining complex and upgrading the delayed coker were continued. In addition, the Omsk Refinery implements the project aimed at setting up the new facility to produce catalysts used for the key processes of secondary oil processing, which, in turn, enable production of Euro-5-compliant engine fuels. The Ministry of Energy of the Russian Federation assigned to the project the national status. In 2018, implementation of the new domestic active matrix catalysts was started; unlike imported analogues, they convert the molecules of hydrocarbon feedstock in valuable products more efficiently.

In 2018, the Moscow Refinery improved the yield of light petroleum products and the refining depth to 59.6% and 83.1%, respectively. The Omsk Refinery also maintained high performance: 71.0% and 90.9%, respectively.

Implementation of refining facilities upgrade programs remains the strategic priority in oil refining development. As a result of upgrading of oil refining assets, the oil refining depth is going to increase to 95%, and light petroleum products yield to 80%.

In 2018, the Gazprom Group’s crude oil and gas condensate sales amounted to 25.6 mmt, which is 7.2% less than in 2017. This is primarily due to the increase of liquid hydrocarbon feedstock processing volumes upon completion of the scheduled overhauls at Gazprom Neft refineries in Russia in 2017.

Gazprom Neft accounts for the majority of petroleum products sales within the Group. Engine fuels are sold through the network of gas stations (GS) and small-scale wholesale channels. In addition, petroleum products are supplied to industrial customers.

(1) Network of gas stations for retail and corporate customers, the amount is net of the VAT.
(2) Including franchising gas stations. 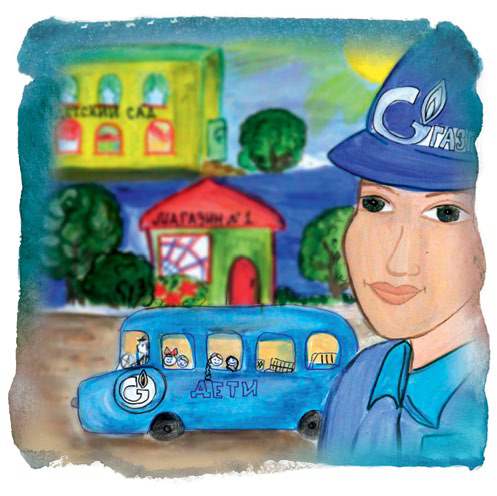 During the reporting period, the total retail sales of motor fuels in the Russian Federation increased by 3.2% vs 2017, to 9.1 mmt. The growth is driven by the increase of daily average flow per GS. Daily average sales per GS increased to 20.74 tons per day, which is 3.3% more than in 2017.

In 2018, Gazprom Neft began the launch of the new premium brand, high-octane G-Drive 100 gasoline, that became the gold medallist of Best 100 Products in Russia Contest. G-Drive 100 is designed for modern engines with at least 95-point required octane rating and shows the highest efficiency and environmental performance. 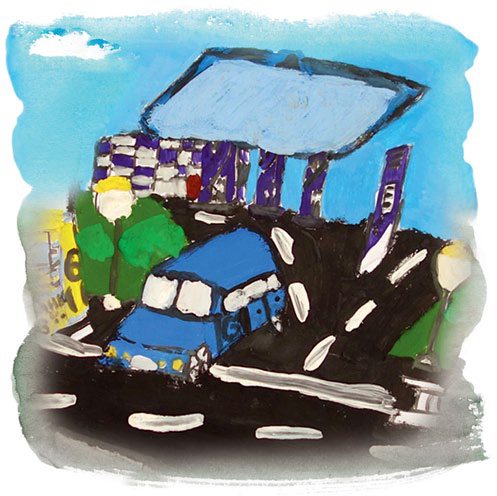 In order to ensure efficient and comfortable customer service at GSs, Gazprom Neft developed the mobile application to pay for fuel at the gas stations included in the network, which reduces the car fuelling time significantly.

Feedback from retail customers of petroleum products is received through several channels: direct communication at GSs, informational materials placement in the media, prompt response to enquiries in official Gazprom Neft GS communities in social media, as well as through the Unified Customer Support Center omnichannel service. The total number of messages received from retail customers tripled in 2018, to more than 24 million pieces.

At the foreign markets, Gazprom Neft GSs network consists of 618 facilities, including 201 GSs in the CIS states (Belarus, Kazakhstan, Tajikistan and Kyrgyzstan) and 417 GSs in the Eastern Europe (Serbia, Bosnia and Herzegovina, Bulgaria and Romania).

By 2025, Gazprom Neft Company intends to increase the total sales of motor fuels in the Russian Federation and CIS via the retail sales channels. By 2021, Gazprom Neft GS network in the CIS shall be expanded by 25 facilities, to 226 stations.

In 2018, the total jet fuel sales amounted to 3.03 mmt in Russia. Jet fuel sales are carried out by Gazprom Neft subsidiary JSC Gazpromneft-Aero, which is one of Top 3 fuel suppliers in Russia.

As of the end of 2018, Gazprom Neft proprietary sales network at jet fuel market consisted of 53 bulk fuel installations (BFI) in Russia and one BFI in Kyrgyzstan. In 2018, the international geography of jet fuel sales expanded to 260 airports (11 airports were added compared to 2017) in 66 countries. JSC Gazpromneft-Aero expanded its geography of operations: it began performing fuelling in Malaysia and Gambia and expanded its proprietary sales network in China.

In 2018, Arctic class refuelling ship, GPN-Murmansk, with a 8,200-ton capacity was added to Gazprom Neft fleet. That vessel is designed for refuelling tanker and icebreaking fleet in complex ice conditions in the Arctics.

During the reporting year, the share of low-sulphur fuel increased in the overall company sales structure. The sales volumes of environmentally friendly bunker fuel with sulphur content less than 0.1% increased by 26%, to 200,000 tons. That is in line with the environmental requirements stipulated in International Convention for the Prevention of Pollution from Ships (MARPOL).

In the medium term, Gazpromneft Marine Bunker LLC intends to expand the range of bunker fuels by using LNG, which meets MARPOL requirements as related both to sulphur content and to concentration of nitrogen compounds.

In 2018, Gazpromneft Marine Bunker LLC passed the resolution to build the first LNG refuelling vessel in Russia, the source of LNG for it would be the LNG production, storage and shipment complex near the Portovaya CS.