In 2018, the Gazprom Group demonstrated strong financial and economic performance. Gross added value generated by Gazprom during the reporting year was RUB 4.8 trillion, or almost 4.6% of the gross domestic product of the Russian Federation.

The Gazprom Group is one of the core taxpayers in Russia. In 2018, the total tax payments to the budgets of all levels exceeded RUB 3.2 trillion. Mineral extraction tax and customs payments account for the majority of such payments, over 55%.

are the total tax payments in 2018

Gazprom is the world leader by natural gas reserves and production, one of the largest Russian companies by liquid hydrocarbons production and processing, as well as by installed capacity and heat and electrical power generation. 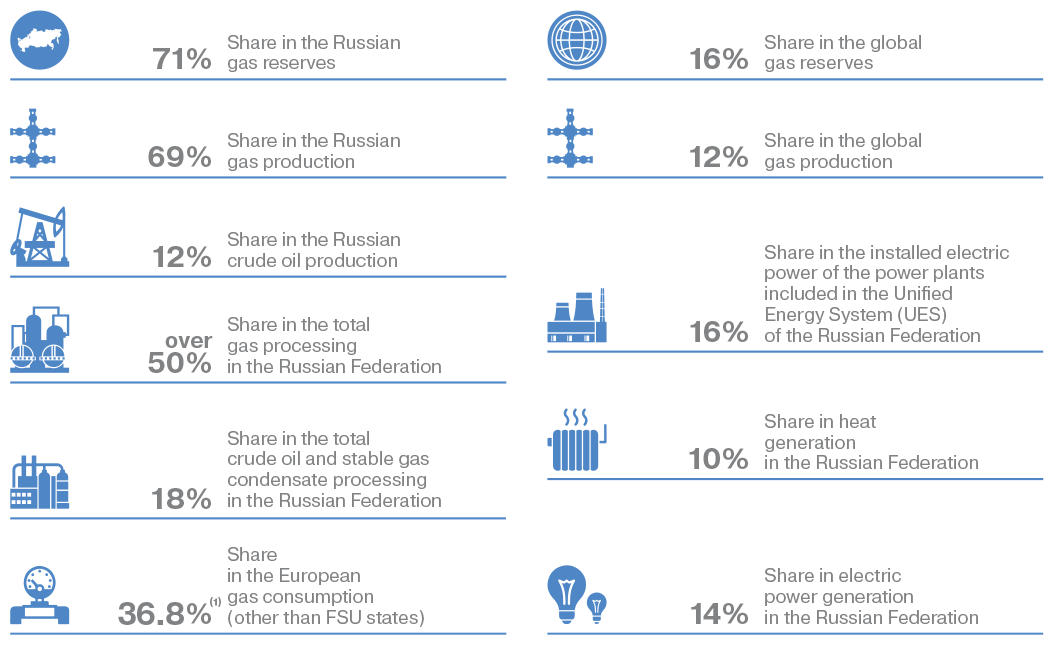 (1) Share of PJSC Gazprom’s international gas sales under contracts of Gazprom Export  LLC, including volumes sold via the ETP and in course of trading operations and under direct contracts of GAZPROM Schweiz AG, in consumption of gas in Europe (other than FSU states).

(1) Including the share in production of organizations in which Gazprom has investments classified as joint operations.

The Gazprom Group implements large-scaled projects aimed at increasing hydrocarbons production and processing, enabling their delivery to customers, as well as at increasing electricity and heat generation and sales.

In 2018, the key Gazprom Group’s projects were:

The gas business accounts for the majority of Gazprom capital expenditures (about 2/3 of the total investments). In 2018, the PJSC Gazprom investment program stipulated implementation of all strategically important projects of the Company. 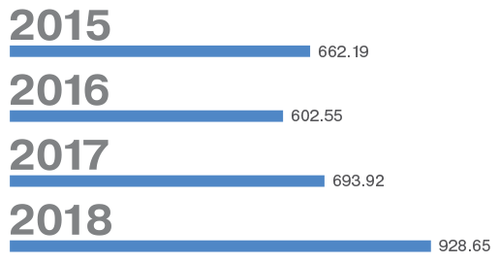 Pursuant to the draft investment program for 2019, the capital expenditures are going to amount to RUB 963.0 billion

The strategic projects are implemented in the northern, eastern and southern areas.

In the northern area, Gazprom is developing large-scale gas and oil production centres. Yamal Peninsula production complex is developed in the Extreme North conditions, where Gas Production Facility No. 3 of the Bovanenkovskoye field and Ukhta — Torzhok 2 were put in operation in 2018. Oil production is increased further at the unique Prirazlomnoye field. That is the only Arctic Deposit developed in the freezing sea environment. In 2018, the Northern Gas Transmission Corridor was expanded further to supply gas to the central and the north-western regions of the Russian Federation and exports by the Nord Stream 2 gas pipeline that is under construction. Construction of the LNG production, storage and shipment terminal in the vicinity of Portovaya CS is in progress. In the eastern area, the Eastern Gas Program is implemented in order to supply gas to the regions of Siberia and the Far East and export to China by the Power of Siberia gas pipeline. The Amur Gas Processing Plant (GPP) would become an important component of the value chain; there, valuable components will be extracted from gas from the Chayandinskoye and Kovyktinskoye Fields for petrochemical and other industries.

Pre-development operations are underway at the Kirinskoye and Yuzhno-Kirinskoye fields, which are the basis of the Sakhalin gas production center.

In the southern area, construction of the TurkStream gas pipeline continued in 2018 to supply gas to Turkey and European countries. The first power unit was commissioned at the Grozny TPP, which plays an important role in power supply of the southern regions of Russia.